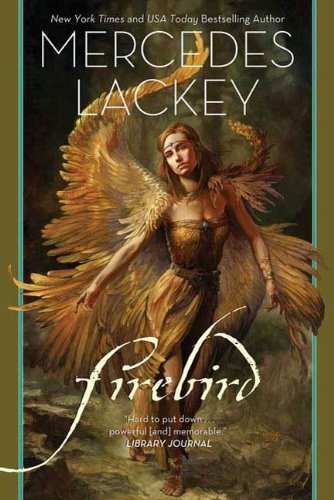 A fantasy tale by Mercedes Lackey published in 1996, Firebird is based on The Brothers Grimm's "The Golden Bird", the Russian ballet The Firebird with music by Igor Stravinsky, and several Russian fairy tales, including "Tsarevitch Ivan, the Fire Bird and the Gray Wolf."

Ilya Ivanovitch is the middle son of Tsar Ivan (really, he's just a boyar, but he calls himself a tsar) in the country of Rus. His father is a greedy, jealous Jerkass, and Ilya's seven brothers are no better, with Ilya as The Unfavorite.

Then someone starts stealing the Tsar's cherries. These are rare and special cherries, bred to ripen late and satisfy Ivan's sweet tooth after the normal season is over. The thief strikes in the night, and no matter how the Tsar berates and threatens, the guards are always found dead asleep at their posts.

Ivan finally declares that his sons will stand guard over the orchard, one each night in order from eldest to youngest, and whoever catches the thief will be named his heir. While his brothers try and fail, Ilya sneaks into the orchard himself, armed with pins to keep himself from falling asleep, and discovers the truth; the thief is the beautiful, mysterious, and magical Firebird.

Ilya is entranced, but when she sees him, the Firebird flees in terror. Unfortunately, those who see the Firebird are cursed with bad luck so they can't catch her. Seemingly as an apology for this, the Firebird later gifts Ilya with the ability to speak with animals. Adventure ensues.