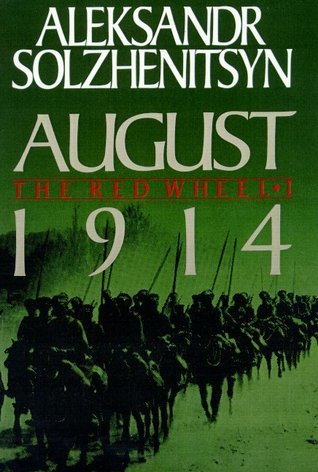 August 1914 is a 1971 historical fiction novel by Aleksandr Solzhenitsyn.

It focuses on the Battle of Tannenberg

between Germany and Russia in 1914, the first major engagement on the Eastern Front of World War I. At the start of hostilities the Russians invade the German province of East Prussia. Their armies are hastily organized and poorly equipped, lacking in transportation. Army intelligence is nearly non-existent, leaving the First and Second Army to enter German territory almost blind. The Russian armies are slow and ponderous, marching in territory mostly without railroads, leaving the men footsore and starving. There is no coordination between them, with the First Army taking a leisurely break after its first battle while the Second Army penetrates deep into enemy territory around Tannenberg. Worst of all, the Russians are horribly led, with nearly the entire senior officer corps consisting of fat old incompetent careerist generals, who are too lazy, too cowardly, or too stupid to rise to the crisis of the moment.

The result is disaster, as the Second Army is surrounded and annihilated by the Germans in the most spectacular victory either side enjoyed in the whole war.

The central character is Colonel Vorotyntsev, an officer from the General Staff sent to Second Army to assess the state of affairs. Colonel Vorotyntsev, who in contrast to his superiors is highly competent and intelligent, flits about from spot to spot during the battle, trying frantically to warn his superiors of the decaying situation and get them to take action before it's too late. Also prominently featured as a point-of-view character is General Samsonov, the Real Life commander of Second Army, an amiable dunce who is in way, way over his head, and Yaroslav Kharitonov, a lieutenant who commands a platoon in the thick of the action.

This was the first volume in Solzhenitsyn's "Red Wheel" series that chronicled the collapse of Tsarist Russia. It was followed by November 1916, March 1917, and April 1917.