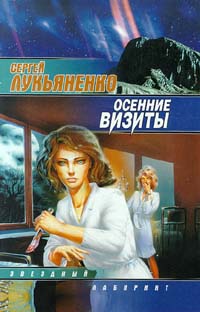 Autumn Visits (Осенние визиты, Osenniye vizity) is a Science Fiction novel written by the popular Russian author Sergey Lukyanenko in 1997. The novel takes place in modern times. Six completely unrelated individuals suddenly find themselves face-to-face with their body doubles, who reveal themselves to be so-called Visitors. The Visitors represent six primal forces of human nature (Creativity, Power, Evolution/Development, Humanism/Goodness, Strength, and Knowledge). The Visitors reveal to their Prototypes that they're, essentially, exact copies of them with the same memories but with additional knowledge. Throughout human history, the Visitors reappear and try to establish their primal force as supreme by eliminating the others (oftentimes, the Prototypes are killed alongside their Visitors), thus setting humanity's course until the next cycle. It's not, however, unheard of for two or more Visitors to cooperate if another Visitor represents a much greater threat. There is, however a thirteenth player in the "game". Unlike the others, Darkness (which represents unrestrained freedom and chaos) does not create a Visitor. Instead, it empowers a contract killer (and pedophile) to hunt down all the Visitors and their Prototypes. Light is also mentioned to be a primal force, but has not appeared since Jesus Christ, as humanity no longer has any light in them.