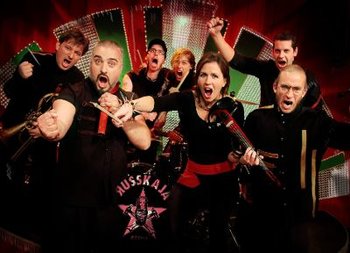 From Russia With Ska

Russkaja (Stylized as ЯUSSKAJA) are a Austrian ska band.

But that's putting it too simply. As described by the band themselves, their music is "Russian Turbo Polka Metal". And it shows in their songs, combining ska trumpets, metal screams, violins and anything else the band can seem to get their hands on.