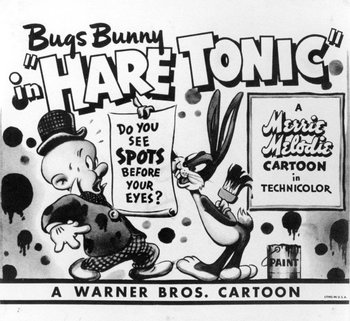 "Hare Tonic" is a 1945 Looney Tunes short (directed by Chuck Jones) starring Bugs Bunny and Elmer Fudd. It is the second short Jones directed featuring the two, the first being "Elmer's Pet Rabbit".

Elmer Fudd purchases a live rabbit, Bugs, from the store, with intent on making "wabbit stew". However, Bugs decides to take advantage of the setup and heckle Elmer by making him believe that he has "Rabbititis", a highly contagious dread disease with symptoms that include seeing spots before the eyes and assuming rabbit characteristics. Terrified out of his mind, Elmer tries to keep himself from catching Bugs' contamination as the rabbit spends the rest of the cartoon making him believe he has the "Rabbititis".