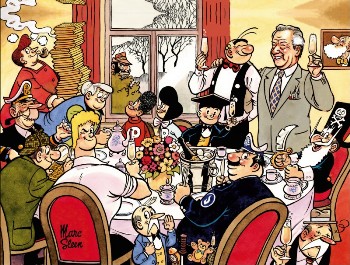 The cast members having their traditional waffle dinner along side their creator.
Advertisement:

Nero is one of the iconic Flemish comic strips, along with Suske en Wiske, Jommeke, Piet Pienter en Bert Bibber and De Kiekeboes. One of the all time Print Long-Runners "Nero" was published in newspapers from 1947 until 2002. Author Marc Sleen (1922-2016) drew the comic singlehandedly from 1947 until 2002, while working on dozens of other comic strip series until 1965 (!), which in 1992 won him a mention in the Guinness World Records book. Because of his failing eyesight Sleen hired an assistant, Dirk Stallaert, who was meant to be his successor. Stallaert drew "Nero" for ten years, but in 2002 Stallaert made public that he wanted to work for Suske en Wiske instead. Sleen then decided to quit his comic strip series all together, after 55 years of continuous publication.

"Nero" started off as a children's comic, but gradually changed into a series for adults. While other comic book series aim for timelessness "Nero" took full advantage of its status as a newspaper comic. References and shout-outs to current events were often integrated in the plot. Instead of removing these jokes in the album version, like Suske en Wiske did, "Nero" kept all of them intact, even though many of them, as Time Marches On, became less comprehensible to modern day readers. Because author Marc Sleen was originally a political cartoonist he regularly gave real life celebrities of the day a cameo in his stories.

The stories were always whipped out on deadline, which caused many strange stories full of weird plot changes and continuity mistakes. Still "Nero" is still held in high regard for its ironic and anarchic comedy, unpredictable plot developments, wacky characters and Sleen's highly personal vision.

Not to be confused with the Roman Emperor Nero or the music band.