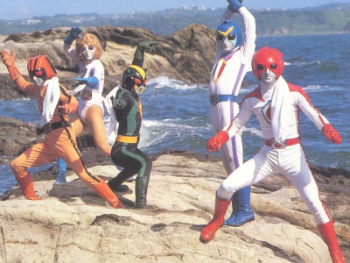 Battle Fever J was the third Super Sentai show, lasting from 1979 to 1980. Following up on the success of their tokusatsu adaptation of Spider-Man (which most of the early Sentai crew worked on after the end of J.A.K.Q. Dengekitai), Battle Fever J was originally intended to be a localization of the Marvel Comics superhero Captain America, which would have starred a Japanese counterpart named "Captain Japan". However, this idea was revised after Toei decided to resurrect the Sentai series (without Shotaro Ishinomori's involvement) following a two-year hiatus by adding a giant robot to the formula.

Due to rights issues with Ishimori Productions (Ishinomori's production company, which produced the first two Sentai series), Battle Fever was briefly considered to be the first Super Sentai between 1988 and 1994, even being referred to as such in the first televised Super Sentai crossover in 1989. These issues would be cleared up by 1995, however, and Battle Fever is once again considered the franchise's third installment.

In 2020, the show was being made available on Youtube via the Toei Tokusatsu World Channel.note Do note that depending on where you watching it (outside Japan), it may or may not be available for viewing in your country/territory. An HD remaster began airing on Toei Channel in 2021.

When the evil secret society of Egos arrives in Japan to take over the country, General Tetsuzan Kurama of the Defense Department gathers five young agents to form Team Battle Fever. Each agent has received specialized training from different organizations around the world and have developed their own fighting styles based on international dance moves.