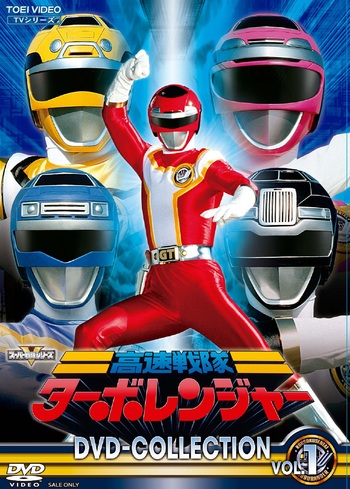 Teenagers With Attitude. Earlier than you expected.note Shifting into turbo or start your engine not included.
Kōsoku Sentai Turboranger (High-Speed Squadron Turboranger) is the thirteenth entry of Super Sentai series, airing from 1989 to 1990. At the time of airing, it was considered part of Super Sentai's tenth anniversary celebration.note Rights issues prevented Goranger and JAKQ from being called "Super Sentai" from 1988 to 1994.
Advertisement:

Because of nature being destroyed, the fairies can no longer maintain the seal on the Hundred Boma Tribes, who have now revived in an attempt to Take Over the World. The fairy, Seelon, under the command of Saint Beast Lakia, calls out to five warriors who can hear her voice, five high school students (who apparently stumbled upon the fairies lair and witnessed them). And they fight the Boma, using the combined power of mysticism from Seelon, and science (mainly cars) from their guiding professor as the Turborangers!