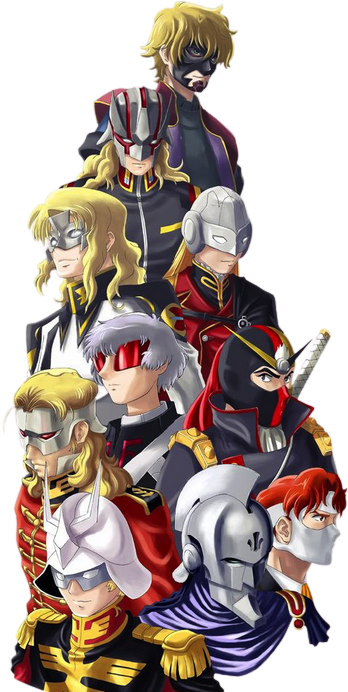 Char Aznable (bottom left) and some of his "clones" throughout the franchise. From top: Mr. Bushido, Neo Roanoke, Rau Le Creuset, Zechs Merquise, Harry Ord, Schwartz Bruder, Full Frontal, Carozzo "Iron Mask" Ronah, Cronicle Asher.
Narrator: Anyway, he must use this seizure-inducing machine to save the world! And/or space colonies.
Neo Roanoke: But to do so he has to get through me, the conflicted villain who also serves as his main rival. Also, I have a cool mask.
Rau Le Creuset: Hey, wait a second, you're just copying me.
Zechs Merquise: No, you're copying me.
Cronicle Asher: No, both of you are copying me.
Char Aznable: No, all of you are copying me!
— Gundam: A Summary

A Char Clone is a character who is based on Char Aznable from the Gundam franchise, a Fountain of Expies. The Gundam series was (and is) wildly popular in Japan, with a cultural impact comparable to Star Trek or Doctor Who in the West. Char, an antagonist in the original Mobile Suit Gundam, became the most iconic character of the series, outpacing even the main characters and the Big Bad in popularity. Given the sheer number of characters that reference, homage, or flat out are Char with a different name, they eventually became known as Char clones.

A brief history of the original Char: in Mobile Suit Gundam, he was The Rival to the main character. A mysterious masked man with distinctive blond hair, he was an Ace Pilot called the Red Comet with a penchant for piloting Ace Custom mecha painted red (which was said to be three times faster than its mundane counterpart, despite the only visual difference being its color). Over the course of the series, it is revealed that Char has a hidden agenda — avenging his father, who was assassinated by the series Big Bad — and that his estranged sister is part of the heroes' crew. The first indication of these goals came from leading Garma Zabi, who seemed to be a long time friend, into an enemy ambush where he was killed, and this was the start of him systematically targeting the Zabi family. In the sequel series, Mobile Suit Zeta Gundam, he adopts a Paper-Thin Disguise and makes a Heel–Face Turn, allying with the good guys and acting as The Mentor for the new generation. His presence solidifies the twist in the series that the heroic Federation of the original series had turned into the villains. His final appearance comes in the appropriately-named Mobile Suit Gundam: Char's Counterattack, where he's a villain again, attempting to drop a giant asteroid onto Earth for the good of mankind. His self-righteous campaign involved leaking new technology to the heroes in the belief that he needed a Worthy Opponent at the top of their game to make his actions justified.

Expect to see these traits in a Char clone:

Other than those universal aspects, these characters tend to fall into one of three aspects, which could be roughly aligned with the three works Char appeared in: Mobile Suit Gundam, Mobile Suit Zeta Gundam, and Mobile Suit Gundam: Char's Counterattack. The bolded parts are mainly the defining role of that character. When two or more of these types of Char Clone appear in a story, they need not be the same character at different points in the timeline; it's perfectly acceptable to split up Char's three primary roles into multiple clones, and indeed this is what's more often done so as to help the clones distinguish themselves from the original.

Incidentally, Char himself is based off Manfred von Richthofen, the Red Baron (at least in terms of characterization. His visual design was based on Prince Sharkin of Raideen, while his name is a reference to famous French singer Charles Aznavour).

Char Clone is a character-specific subtrope of Fountain of Expies. Compare Stock Shōnen Rival, Shana Clone, and Rei Ayanami Expy.note The fact that many traits are shared between these two character archetypes is not entirely coincidental. Not to be confused with expies of Charmander, Charmeleon, and Charizard. See also Red-plica Baron; Char being an expy of Richthofen makes this whole trope an expy of an expy of the original Red Baron.

Alternative Title(s): He Is A Char