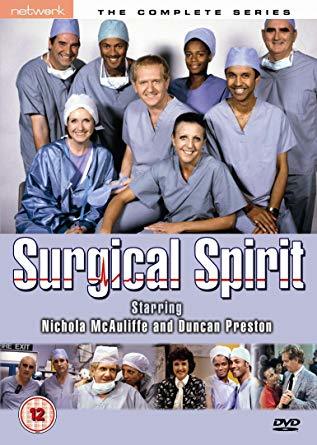 Surgical Spirit was a British comedic television series that aired on ITV from 1989 to 1995. It had seven seasons, and starred Nicola McAuliffe, Margi Campi, and Duncan Preston among others.

Sheila Sabatini is a brilliant surgeon who works at the Gillies Hospital, and has done so for many years, despite having complicated relations with her coworkers. Her home life is fraught, as she's divorcing her husband, Remo, while trying to hold together her home for their son, Daniel. Unfortunately, there's one thing that happens to be complicating all of this: to be blunt, Sheila has the personality of a permanently pissed-off bull, and she's got a tongue to match. Most of her colleagues, like fellow surgeons George Hope-Wynne and Neil Copeland, are both afraid of her and angered by the extremely creative insults she spouts, excepting Sheila's best friend Joyce, the administrator of Sheila's section of the hospital; the anaesthetist, Jonathan Haslem; and accomplished nurse Cheryl Patching. But altogether, they make a good team, even when various attempts at friendships or relationships make things even more complex…

Unusually for a medical show, Surgical Spirit had little to no focus on matters of surgery or medicine: the show focused on the staff, and the hospital served as a backdrop. However, this doesn't make it any less watchable, because the writers put a lot of effort into the show, the characters, and the extremely creative insults Sheila throws out.

Tropes found in this show include: