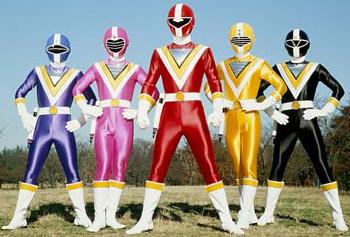 Chikyū Sentai Fiveman ("Earth Squadron Fiveman") is the fourteenth installment of the Super Sentai franchise, which aired from 1990 to 1991.
Advertisement:

The scientist Dr. Hoshikawa is working on ways to bring life to barren planets. Just when his labors seem to be bearing fruit, the planet he is on is attacked by the Galactic Empire Zone. His five children escape the planet safely, thanks to their robot, Arthur, but Dr. Hoshikawa and his wife do not manage to get away from the planet.

Twenty years later, the children have grown up, and are now elementary school teachers when Zone comes to destroy Earth. The children use their father's inventions to fight against Zone and save Earth.