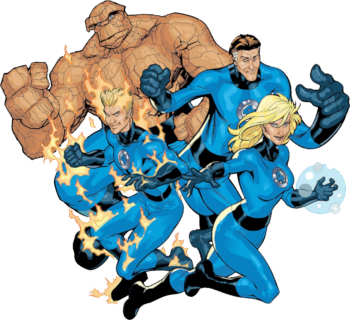 What a fantastic color!
Blue, the color of the heavens, the color of a knight's armor. The color of life-giving water, and an innocent child's eyes. The color of a policeman's uniform, and, in the US and Britain, the color of anti-communist soldiers and patriots. For all these reasons and more, the color blue has an association with goodness, such that a blue Color Motif is often a visual shorthand for The Hero or the good guys.
Advertisement:

Often times this goes along with a more old-fashioned or cerebral type of heroism. While red-clad heroes tend to be Hot-Blooded, since Blue Is Calm blue heroes tend to be more disciplined and reserved, whether due to a code of honor, more training, a focus on brains and strategy, or simply a calmer personality. It's common for red- and blue- themed heroes to be paired together as The Hero and The Lancer in a Red Oni, Blue Oni setup.

There are a few requirements for this trope:

Must be a hero:

See also True Blue Femininity and Pink Girl, Blue Boy for other blue tropes, and Primary-Color Champion when blue, red, and yellow are all used together to signify heroism. Also see Color-Coded Armies, Color-Coded Characters, and Color-Coded Wizardry for other uses of contrasting character colors.

Overlaps with Good Colors, Evil Colors when paired with an antagonist in a contrasting color (often red and black or a secondary color).

See the Analysis page for discussion of real life reasons for this trope.