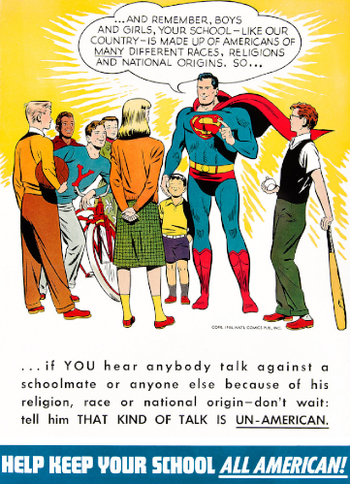 This poster was made in The '50s.
"It's still a cut above what people give it credit for and I think it would be more appreciated if it came out today. Because we need stories like this today. Fascist abusive Frollo, justice for the oppressed, the focus on how some men really do loathe the object of their desire, the wholesale demonization of ethnic groups. Maybe this movie wasn't really appreciated in its time because it didn't resonate as much in 1996, but it does resonate more in 2017. [...] And consider that hokey as it may be at points, like Hugo's message about the importance of architecture in the 1830s, this might be what we need in our time."
— Lindsay Ellis, "The Case for Disney's The Hunchback of Notre Dame"

Some moral values just don't travel well. The attitudes of our society have changed, or the issue they addressed has become obsolete.

But others — like a good wine or fine cheeses — only get better with age. Years after the original author and audience have passed, new generations will still look at the given Aesop and say "Damn straight." Maybe some authors knowingly spoke to issues that were years ahead of their time. Maybe many of society's questions are just Older Than They Think. Maybe they just got lucky. These are the principles that stand the test of time and have outlived the original moral issue they were meant to address a hundred times over.

Even when a work is non-ideological, it can still resonate due to tapping into a style or gimmick that would not become popular for many years. Art historians have pointed out, for example, that paintings in the nonrepresentational or abstract style were created in the 16th century by Italian painter Giuseppe Arcimboldo — a full 300 years before expressionism became fashionable in Western art.

But while this is somewhat subjective, there is a key guideline that should be borne in mind when considering examples. The key element of this trope is that the value or values presented or portrayed in the example resonate with an audience culturally removed from the originally intended or expected audience. It is not resonance when the values in a work are significant or meaningful to the audience for which the work was originally made; a thing does not resonate with itself. That usually requires that the work is from an earlier time or from a different culture than the audience with whom the work is resonating. There is some flexibility here for certain media or works where the intended audience moves on after only a few years, but even that flexibility is limited, since, just because the audience has moved on, it does not follow that the work is now being consumed by a fundamentally separate culture.

Compare and contrast with Fair for Its Day, where the morals the work presents are kind of off, but compared to other opinions from its age, very forward-thinking. Contrast Unintentional Period Piece, where the setting and narrative fluff of the work ties it to a single time period (though note that it can still overlap with this if the themes are louder than its cultural trappings). Also compare Politically Correct History, which is when modern sentiments are presented in-universe to purposely elicit the same effect.

Note: Examples regarding the resonance between time periods require a 20-year waiting period before they can be added.

open/close all folders
Advertising
Anime & Manga
Art
Comic Books
Films — Animation
Films — Live-Action
Literature
Live-Action TV
Music
You'd probably think that they were written sometime after the Stonewall Riots or in the era of the modern LGBTQ rights movement. In fact, they come from "Das Lila Lied", a German cabaret song written in the 1920s. The phrase "different from the others" (in German, "Anders als die Andern") comes from a 1919 movie which was among the first ever to deal with LGBTQ topics, and was inspired by the contemporary advances that were being made in sexuality research in pre-Nazi Germany.
Mythology and Religion
Podcast
Radio
Theatre
Urban Legends
Video Games
Web Animation
Real Life