Video Game / Rolo to the Rescue 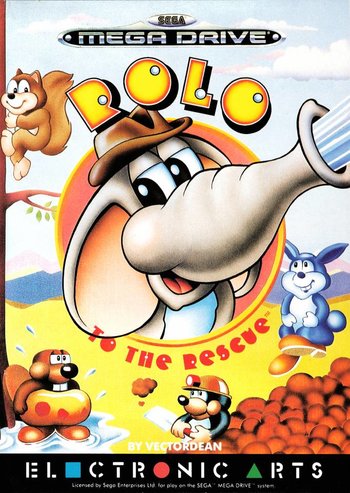 Rolo to the Rescue is a platform game from Electronic Arts released in 1992 for the Sega Genesis.

Young elephant Rolo has escaped from the circus, and he must save his friends who have been locked up in cages. Most levels require Rolo to defeat circus magnate McSmiley and steal his key so he can set his friends free. Each of Rolo's friends has a different ability which can aid in solving puzzles throughout levels.

When Rolo saves all the animals in one level, he collects a puzzle piece which opens another part of his map. Puzzle pieces are also scattered throughout levels and are required for 100% Completion. Rolo can also take on different abilities himself by touching certain items: he can inhale smaller enemies with his trunk, spray water, inflate himself with helium and go into tiny areas by shrinking himself in a washing machine.

Rolo's bosses are performers from the circus which he escaped. By defeating them, Rolo can access new worlds with varying difficulty. After defeating the ringmaster, Rolo reunites with his captured mother.