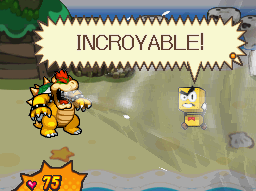 Hope he's got a good filter in there.
Advertisement:

A character takes a deep breath in order to draw various objects in along with the air, water, or whatever other substance they happen to be in. There are two sub-tropes to this trope:

In cartoons this typically appears as a comedic sight-gag, in which a lazy Big Eater consumes large amounts of food by sucking it into his mouth. This may be accompanied by the sound of a vacuum cleaner and/or have the character's mouth take the shape of a vacuum nozzle for added humor. Particularly common in animated depictions of elephants, aardvarks, and similar animals, whose trunks and elongated snouts often undergo Dinner Deformation to show what becomes of the consumables they've suctioned up.

This sometimes appears as an innate ability of a character. More often found in monstrous (or at least non-human) creatures with big mouths. In battle they suck in air to draw their opponent towards them, in an attempt to devour them directly or simply draw them in closer for an attack. However, the indiscriminate nature of this ability means that the user risks drawing in unwanted items that may damage them in the process. In video game boss fights the player on the receiving end of this often has to mash the control stick in the opposite direction to avoid being sucked in. Often a form of Eating the Enemy and frequently leads to Just Eat Him when used against main characters. Can be considered a type of Breath Weapon.

There is nothing stopping users of the superpower version from using it to justify the sight-gag version, as a form of Mundane Utility.

As the real life examples below show, this trick can in fact work in a liquid medium such as water. Many underwater predators use this as a method of catching their prey. In most fictional depictions, though, the suction is created by drawing in air... which would "realistically" require a rather phenomenal lung capacity or a literal Black Hole Belly to exercise any significant force at range, let alone keep the effect going for longer than a few seconds. Things like vacuum cleaners and jet engines work because they let the air pass straight through them instead of trying to hold it all in.

Weapons That Suck and Tractor Beam are its artificial cousins. In both the user's mouth may stretch into a Volumetric Mouth. Super Breath moves in the opposite direction.

Not to be confused with Vicious Vac, the trope about actual vacuum cleaners.

When the Aardvark tries to suck Charlie out of his anthill, he ends up getting a snootful of Tabasco sauce that launches him into a nearby lake.

When the Aardvark tries to suck Charlie out of his anthill, he ends up getting a snootful of Tabasco sauce that launches him into a nearby lake.