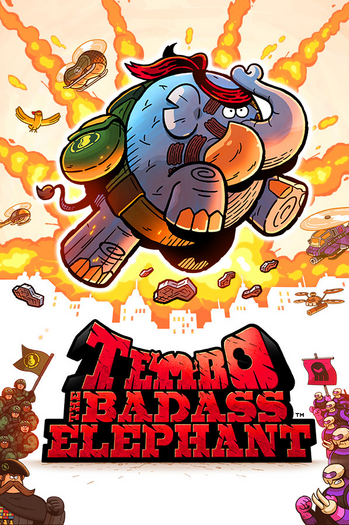 Part commando, all elephant
Tembo the Badass Elephant is a 2-D side-scrolling platformer by Sega and Game Freak. Yes, that Game Freak. The game was directed by James Turner, the same man who directed HarmoKnight and designed several Pokémon for Pokémon Black and White-onward.
Advertisement:

You control an elephant named Tembo, who is on a mission to protect Shell City from The Phantom Army. Tembo controls a little like Rambi from the Donkey Kong Country series, and uses his massive bulk to smash buildings, solve various puzzles, rescue hostages, and trample his enemies. You can even use your trunk to extinguish fires or slam the ground like a hammer.

The game is available for Xbox One, PlayStation 4 and Windows PC.