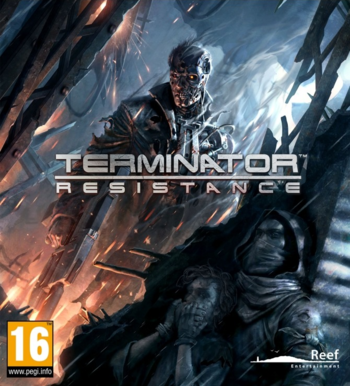 Terminator Resistance is a First-Person Shooter in the Terminator franchise, powered by Unreal Engine 4, set in the "Future War" scenario of the first two films. It was released in November 2019 and developed by Teyon, a Polish studio previously responsible for the infamous Rambo: The Video Game Rail Shooter. Even though the game was released in the same time period as Terminator: Dark Fate, it has no ties to that movie or its changes to the Terminator timeline. For all intents and purposes, the game is set in the "original" Future War timeline seen in the first and second film, with some elements from Rise Of The Machines and Salvation.
Advertisement:

Besides the usual first person shooter combat, the game has stealth elements, gathering and crafting, dialogue trees with NPCs, and the ability to hack enemy turrets.

Players take the role of Jacob Rivers, a Tech-Com soldier in the human Resistance against Skynet, the malevolent A.I. that destroyed human civilization during Judgement Day and is currently hell-bent on exterminating the remaining survivors of humanity with its army of Terminator Killer Robots.

A free DLC, Infiltrator Mode, was added on November 5, 2020, adding a new single map mini-campaign, in which you take the role of a T-800 Infiltrator wiping out Resistance outposts. A second DLC, Annihilation Line, was added on December 10, 2021. It is the first story-focused DLC, which takes place halfway through the main campaign, involving Rivers helping out with Kyle Reese to investigate a civilian settlement that's gone radio silent.

It was released for the PlayStation 5 on April 30, 2021 as Terminator: Resistance Enhanced, as well as a free upgrade for PlayStation 4 owners.