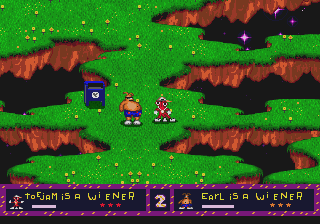 Ouch, man. That's cold.
"Greetings and various apropos felicitations. My name is ToeJam, and this is my homeboy, Big Rappin' Earl. Yo, say wassup, Earl."
"Yo, wassup?"
— 1991 promo rap
Advertisement:

Supremely funky alien homeboys ToeJam and "Big" Earl, proud residents of the planet Funkotron, have crashlanded on the decidedly lame and non-funky planet of Earth. The impact, while leaving them unharmed, scattered pieces of their spacecraft all over the planet, and finding all of these pieces is the only way to get back home. Sounds simple in principle. The Earth's natives might be a bit of trouble, though...

ToeJam & Earl is a series of video games known mainly for the titular first entry, released in 1991 on the Sega Mega Drive/Genesis. The first game is an exploration-oriented Action-Adventure game with an overhead perspective and (the option of) randomly-generated levels, giving it a roguelike feel.

The sequels include ToeJam & Earl in Panic on Funkotron, a two-dimensional Platform Game released on the Mega Drive/Genesis in 1993, where the duo has made it back home, only to find that several Earthlings have stowed onboard, and are now causing Panic on Funkotron. ToeJam & Earl III: Mission to Earth was a three-dimensional platformer released on Microsoft's Xbox in 2002 (the game had been intended for the Sega Dreamcast, but after Sega went third-party, it was ported over to the Xbox as part of Sega's quasi-alliance with them at the time). ToeJam and Earl were also featured in Ready, Aim, Tomatoes!, a pack-in game with the Genesis's Menacer light-gun peripheral. A beta of the third game from when it was intended for the Dreamcast was discovered and released

, bearing many more similarities to the first game than the finished product.

In late February 2015, series creator Greg Johnson announced a fourth game in the series, Back in the Groove, that was successfully funded

on Kickstarter. It was released in March of 2019, and is a return to the style of the original game. Outside of the series, ToeJam and Earl have also appeared as Guest Fighters in other games such as Super Indie Karts, Mighty Fight Federation and Wonder Wickets.

ToeJam & Earl: Back in the Groove provides examples of: