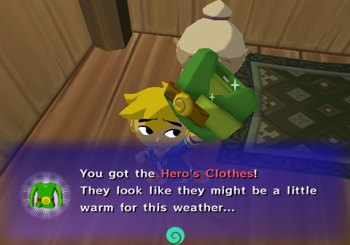 Hey, it's better than saving the world in your pajamas.
Zed: Let's put it on.
J: Put what on?
Zed: The last suit you'll ever wear.
— Men in Black
Advertisement:

You just accepted the Call to Adventure, and you have everything ready. You just finished your Training from Hell, you know Kung Fu, and you have your trusty katana. But something is missing... wait, are you going to fight in jeans and a T-shirt? Hell no! That's not in The Chosen One's Dress Code! It's time for the Suit Up Of Destiny!

Many heroes are not seen in their street clothes, but you can't have an origin story without the character finding and putting on his trademark wardrobe for the first time. This moment is very important, because these very clothes will soon become a part of the hero's identity.

Common in super hero movies and video game series that involve trademark clothing. The hero putting on his trademark clothing is exciting and is looked forward to. Without them, the hero is not who he is supposed to be. It can lead to a Mundane Made Awesome moment. The best way to know this trope is in play is when you can say "These clothes are going to be very important in this character's life" without guessing. A Lock-and-Load Montage may be included if heavy weaponry is part of the uniform.

Compare and Contrast Unnecessary Makeover, where a girl may get an important makeover around the end of the movie, but no one really thought it was... necessary.

Compare and Contrast Transformation Sequence, where the sequence will be shown again and again when the character needs to change back to this outfit or form, and is kept interesting by the power-up mechanism that provides it rather than the first look at the outfit itself.

Has nothing to do with legendary suiting up, unless one of the character's main traits alongside his outfit is being The Casanova.

The dramatic moment when Tony Stark first dons the armor that will make him known to the whole world.

The dramatic moment when Tony Stark first dons the armor that will make him known to the whole world.