This is the cover art for the "Premium Anime Song & Sound Edition". Click here for the regular cover art 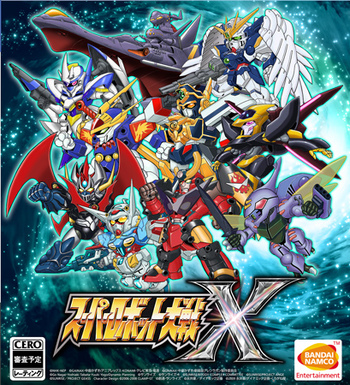 Awaken, o power of miracles!
—The first line of Hagane no Warriors
Advertisement:

Series included in X are (debuting series are rendered in bold):

Somewhere in the universe lies an alternate fantasy world known as 'Al-Warth', where the people and beasts live together and magic is involved. While the land is divided between the Land of Beasts, the Land of Mana and at the center of it, Mt. Soukai, observing them are the Keepers of Order, a group of mediating sorcerers that uphold order in the land, worshipping the God of Wisdom Ende. Al-Warth faces something of a crisis when many people from other worlds are summoned there and several evil forces from within such as Doakdar make their move to conquer the world, but the Keepers of Order remain an enigmatic force. At one point, one of the two sorcerers of the Order; either Iori Iolite or Amari Aquamarine awaken a magical creature that they christen with the name Hopes/Spero and an unused Autowarlock machine, the Xelguard, and depart from the Order to find out the truth about the Order and Al-Warth itself...

Similar to Crossbone Gundam in V, Super Robot Wars X brings long-absent Gundam F91 back to the fold, alongside returning entries from its predecessor; likewise, Dunbine, after stints on dedicated handheld installments. Notably, X marks the first console-based Super Robot Wars where the Getter Robo franchise is not present alongside fellow Long Runners Gundam and Mazinger.

, and the second promotional trailer here