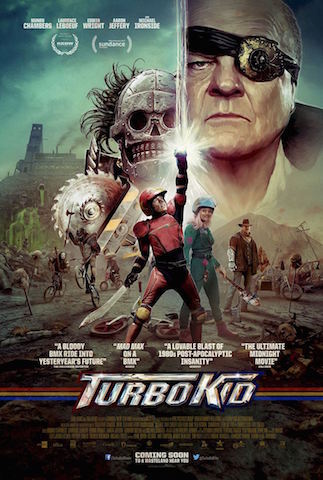 "This is the future. This is the year 1997..."
— Fredrick's opening narration
Advertisement:

It's After the End (in 1997), and nuclear winter has left the land as barren and cold as Canada. Water is a scarce commodity, people scavenge just to survive, and BMX bikes are the chosen method of transportation. In this world lives a nameless, comic-book-loving yet streetwise youth and a hard-boiled "cowboy" named Fredrick the Arm Wrestler...

It's based on a short film by the name of "T is for Turbo", one of the potential entries for the "T" segment of The ABCs of Death (watch the segment here

). Suffice to say that The Movie has a much more positive take on its story.

A sequel is in preparation

, starting just after the events of the first movie.