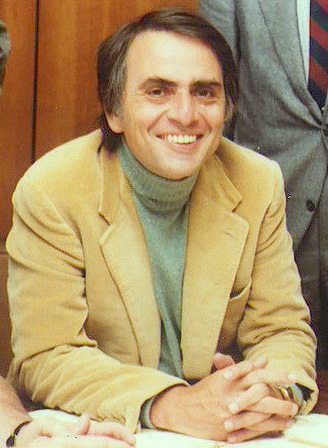 "If you wish to make an apple pie from scratch, you must first invent the Universe."
"It does not harm the romance of a sunset to know a little bit about it."
Advertisement:

Carl Edward Sagan (November 9, 1934 — December 20, 1996) was a famous speaker of the word "billions" as well as an astronomer, astrophysicist, astrobiologist, philosopher, and author who through his various books, including one screenplay which would become the film Contact, and the TV Series Cosmos: A Personal Voyage, became widely known as "The People's Scientist". Apart from his popularizations of science, he also contributed to research in the fields of planetary science, spacecraft exploration of the solar system, and the radio Search for Extraterrestrial Intelligence (SETI). He also developed theories on topics such as the nature of extraterrestrial lifeforms, the environmental effects of nuclear war (nuclear winter), and more.

In mainstream, he's somewhat of a star on Youtube; he's the centerpiece of the Symphony of Science videos, which auto-tunes Sagan's Cosmos along with other science programs to create unexpectedly awesome music videos, which total at about 8 million views. His Pale Blue Dot speech is also a big hit, the two most watched versions having 1.7 Million views combined. His work, although the bulk of it was done 30+ years ago, still stands tall today within science, an incredible accomplishment.

Apart from his science-related work, he was also an activist to legalize marijuana, of which he was a regular user, and was very strongly opposed to the proliferation of nuclear weapons, even getting arrested in 1986 for interfering in a nuclear test. He was also a founder of the Committee for Scientific Investigation of Claims of the Paranormal (CSICOP), which sought (and continues to seek, as the Committee for Skeptical Inquiry) to debunk most forms of paranormal and (later enlarged to) pseudoscientific claims (enlisting the assistance of Isaac Asimov and others, including Stephen Barrett who joined as a fellow later). He was thrice married, first to biologist Lynn Margulis, then to artist Linda Salzman, and finally to author Ann Druyan, with whom he co-wrote Cosmos and several of his books.

Fun Fact: His son Nick is a screenwriter who's done episodes of Star Trek: The Next Generation and Star Trek: Voyager.

Works he has been involved in include:

Books by Sagan include:

His major scientific contributions include:

Tropes often invoked by Sagan include: