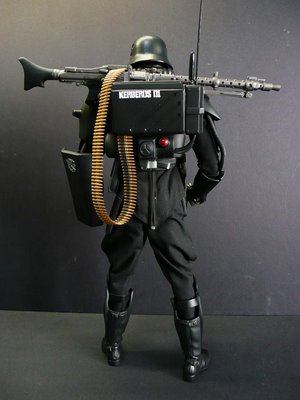 When Public Security saw the figures on Kerberos' workmans' comp payouts for back injuries, their fate was sealed.
Advertisement:

A Sub-Trope of Awesome Backpack, the Ammunition Backpack is there if you use More Dakka, but don't have Bottomless Magazines, or just don't have enough space to carry more ammo in your pockets or Badass Bandolier. Depending on the size of the backpack, the wearer may become a Mighty Glacier due to the weight slowing movement.

Common for characters using hand-held miniguns (such as the trope-codifiers for hand-held miniguns, Blaine from Predator and the T-800 in Terminator 2: Judgment Day) or other portable machine guns. Also included are fuel tanks for flamethrowers, quivers for bows & crossbows of the Archer Archetype, portable power plants/generators for heavy Energy Weapons, and the like. In Video Games, an enemy (usually an Elite Mook of some kind) wearing an Ammunition Backpack will typically be invincible everywhere else, and can only be defeated by shooting the backpack until it explodes in a spectacular fashion, even though that wouldn't work in real life.