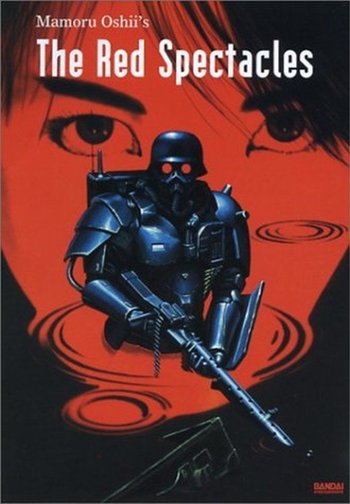 Take off your rose-tinted glasses, and look hard at reality
Advertisement:

The film is in the first entry in the Kerberos film trilogynote chronologically before StrayDog: Kerberos Panzer Cops and Jin-Roh: The Wolf Brigade.

The movie starts in the aftermath of The Kerberos Riot when Koichi Todome is forced to flee from a Tokyo-led crackdown on Special Armed Garrison "Kerberos" unit after a Kerberos officer has brutally killed a civilian while on official duty. This was one of the main reasons why Tokyo wanted the unit to surrender, turn their gear in and disband. Years later, Koichi returns back to Japan secretly in the hopes that he can link up with his ex-comrades who have survived the siege and/or have been released after being incarcerated for mutiny. As he returns to the country, he finds that the city has started to decay at a rapid pace and everything seems surreal and strange. From here on out, the film goes completely insane and turns into an David Lynch esque arthouse film.

Much of the film's cast is composed of voice actors whom Oshii had previously worked with in the anime industry, most notably Shigeru Chiba and Hideyuki Tanaka.