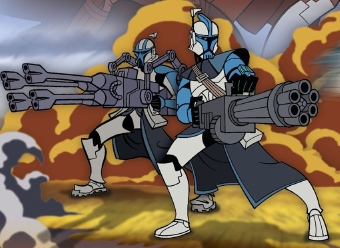 Sir, we have More Dakka!
"You know what this is? It's simplicity itself. You see, you point it at what you want to die, and you pull the little trigger here, and a little bullet comes outta here, and the little bullet hits you right there! And you know what? You don't look like Ava Gardner no more."
— Quentin Tarantino in Planet Terror
Advertisement:

Naturally, the Sword Counterpart for this index is Sword Tropes.