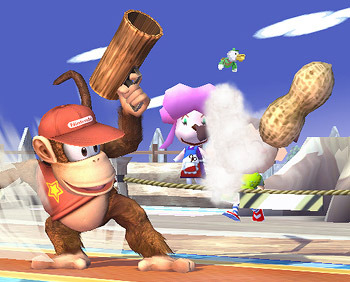 Exhibit A: The Peanut Popgun
Otacon: Wait, here's the best part. You see them lying on the ground after he shoots? If you pick up some of those peanuts, they'll restore your health a little.
Snake: Hmm. Edible ammunition, huh... Times sure have changed.
— Super Smash Bros. Brawl
Advertisement:

A Sub-Trope of Abnormal Ammo, basically it's any type of food used as ammo, whether it be thrown or launched. May have additional effects.