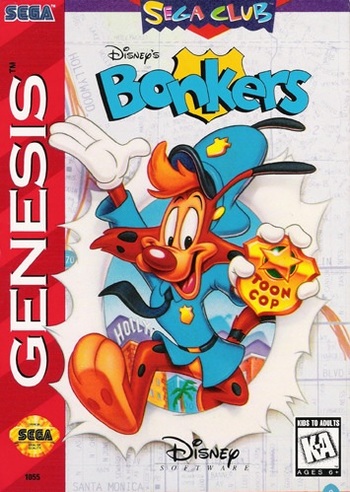 A Licensed Game based on Disney's Bonkers, released in 1994 by Sega for the Sega Genesis as part of their "Sega Club" line of games aimed at children under twelve.

An Officer of the Month competition is being held at the Hollywood Police Department. While his business partner, Lucky Piquel is on vacation, Bonkers D. Bobcat enters the competition in the hopes of winning it to make Lucky proud of him. In order to win the competition, Bonkers has to arrest Toontown's four most wanted criminals; Harry the Handbag, The Rat, Mr. Big, and Ma Tow Truck.

You play as Bonkers, and in order to arrest Toontown's four most wanted criminals and win the competition, you play a series of mini-games, which can be played in any order you choose. These mini-games consist of many levels. As the levels progress, they become harder. Bonkers has a limited amount of lives, but he can get more by winning bonus rounds that happen in between the mini-games' main levels.

In Harry the Handbag's stage, Harry's raccoon thieves are trying to steal five treasures from the toon museum. Bonkers must throw donuts at them to stop them, but they can also throw them back at him. Bonkers loses a life if he loses all of his health or all five treasures are stolen.

In The Rat's stage, The Rat has built a machine that tosses garbage everywhere. Bonkers must build a brick wall to keep the machine from throwing garbage over it while dodging the garbage the machine tosses at him. The Rat will try to slow down Bonkers' progress by breaking the wall down.

In Ma Tow Truck's stage, Ma and her henchmen have taken over the freeway, and Bonkers, with the help of the squad car, must run them off the road. Bonkers must first stop Ma's henchmen in their tracks with oil slicks and bubble gum. He has a limited supply of these, but can collect more from the toon chopper. After Ma's henchmen are defeated, Bonkers must then defeat Ma.