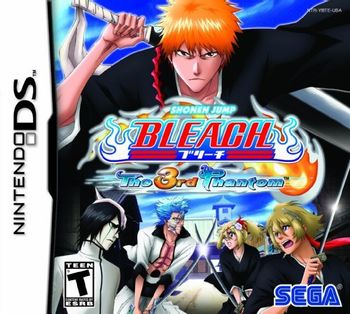 Bleach the 3rd Phantom is the third game in the Bleach DS series based on the popular anime and manga, it is a departure from the usual fighting game formula established by Blade of Fate and it's sequel Dark Souls, instead being a strategy RPG. The game progression is done through a mode called free time, where the chosen main character interacts with various heroes from the series.

The plot, which takes place in an Alternate Continuity, comes from Tite Kubo himself, and introduces four new characters, the Twins Fujimaru and Matsuri and their adoptive family Konoka and Seigen Suzunami, thrown through time after Arturo Plataedo (who some players might remember from Bleach: Shattered Blade) attacks the soul society and is stopped by an object known as the Shisui Mirror.