Throw the Mook at Them 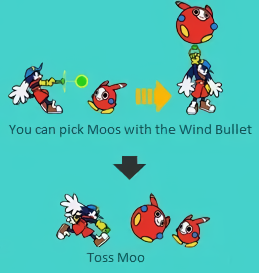 Moove out of the way.
A video game character has the ability to pick up his enemies and toss them as an attack towards other stuff. Common in Action and Platformer games. It can take various forms, such as the standard grab and throw or it can be a kick or other method of launching foes away.
Advertisement:

This can be a tactic to fight bosses, particularly those who summons mooks to aid them. Some game puzzles may provide you with mooks for you to use as bombs to destroy objects or walls if they are Action Bombs. The mooks in both cases here are often Respawning Enemies, because if they don't respawn it would render the boss a Marathon Boss, a puzzle a tedious one, or make it Unwinnable at worst.

Having a Grapple Move is often obligatory (you can't throw what you can't grab), although some other ways of launching an enemy towards things can exist. Sister trope of Boss Arena Idiocy. Compare Tennis Boss for when the boss's attacks can be thrown back at it. Also compare Equippable Ally, where it's your friends you're throwing around. For boss fights especially, this can make them a Tactical Suicide Boss, or (depending on how much doing this inconvenienced the boss) it may not.

Has nothing to do with Throw the Book at Them. See also Grievous Harm with a Body and Fastball Special.

Yoshi gulps up an enemy and spits it into another. This is the only way to beat the otherwise invincible Iron Clefts at the Glitz Pit.

Yoshi gulps up an enemy and spits it into another. This is the only way to beat the otherwise invincible Iron Clefts at the Glitz Pit.