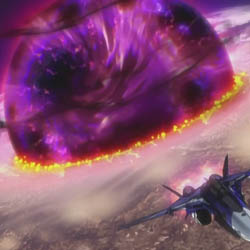 Who the hell gave Fold weapons to Gundam fans?
Evek: How big was the explosion?
pipes!: It was really big but it was shaped like a sphere but there was no shockwave, but that's OK...
— The Freelance Astronauts, The Tale of Sephiroth Goku the Stampede, as recounted here.

Explosions in fiction sometimes have a negligible effect outside of anything in the direct blast radius — buildings and sidewalks have relatively precise chunks taken out of them, but there's precious little singeing or shockwave damage. In the most blatantly overdone cases, the blast radius looks like a huge sphere of negative space 1500 feet across, with neat slices taken out of surrounding buildings, pavement, cars, hillsides, et cetera; there appears to have been no actual heat, let alone shockwaves, emanating from the explosion at all — the only result is that a massive spherical section of the environment appears to be missing.

This is often done with Phlebotinum-enabled explosives, allowing creators to Hand Wave this effect under the Rule of Cool. If the target of the attack happens to have a Beehive Barrier, expect anything surrounding him to be in similar pristine conditions.

Related to Convection Schmonvection, Do Not Touch the Funnel Cloud, Pillar of Light, Kung-Fu Sonic Boom, and Having a Blast. Stylistically similar to Sphere of Power.