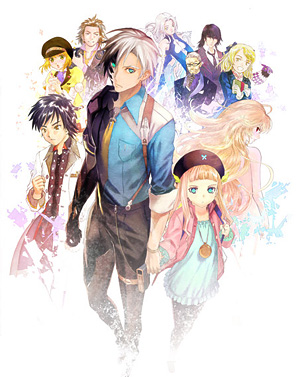 "Everything rides upon this one choice. Not just your life... but the fate of the entire world."
Advertisement:

One year after the fall of the Schism, the newly unified Rieze Maxia and country of Elympios are working towards peace and harmony, and research into the newly-developed Spyrite technology promises to one day end Elympios' dependence on the environmentally-degrading Spyrix, allowing the barren land to recover. But not all is well: the terrorist group Exodus continues to stir tensions between the two countries, the denizens of which struggle to accept each other, and a new conflict threatens both worlds...

Ludger Kresnik lives in Trigleph with his older brother Julius, one of the top agents of Spirius Corporation, a company with overwhelming influence over Elympios. After failing to pass the entrance examination and become an agent himself, Ludger finds a new job as a cook at a train station, briefly meeting Jude Mathis on the way there, but is swept up in an Exodus terror attack and finds himself protecting Elle Marta, a little girl seeking the Land of Canaan, a mythical place said to grant wishes. In the ensuing chaos, Elle's father's pocketwatch merges with the identical watch carried by Julius, revealing that Ludger possesses the power of the Chromatus, an ability passed down through the Kresnik clan.

In the aftermath, Ludger racks up a staggering twenty million gald medical bill, and his brother goes missing after being accused of working with Exodus, with Ludger himself also a possible suspect. Together with Jude, Elle, and his cat Rollo, he reluctantly aids the Spirius Corporation in tracking down Julius, recruiting Jude's friends from the first game, and running into strange parallel worlds along the way. After a warrant comes out for Ludger's arrest, Spirius' CEO Bisley Bakur offers Ludger a job as the agent of Spirius' Department of Dimensional Affairs, previously headed by Julius himself. The worlds the party have been running into are known as Fractured Dimensions, offshoots of the Prime Dimension, powered by a Divergence Catalyst. Ludger is hence tasked with destroying these dimensions in order to restore soul energy to the Prime Dimension, as well as collecting the five Waymarkers needed to reach the Land of Canaan and stop the threat of Fractured Dimensions once and for all.

All of the main characters from Xillia return, including some characters that were killed and make appearances in fractured dimensions. The combat system (Cross Double Raid Linear Motion Battle System) lets Ludger swap weapons and fighting styles on the fly, switching between twin blades, twin pistols and a hammer. Link Artes have been split into Unique Artes and Common Artes, the latter of which can be performed between any two characters that have the appropriate move. Furthermore, Ludger now has a special Limit Break gauge that activates his powerful Chromatus form, teleporting the battlefield into a parallel world where he gains incredible power for a short time.

For the first time in a mothership Tales title, Ludger is a silent protagonist, whose spoken dialogue is limited to Dialogue Trees that appear in skits and cutscenes, and decides the game's Multiple Endings.

The game released in November 2012 in Japan, and internationally in August 2014, both exclusive to the Playstation 3. It received a shortened but largely faithful manga adaptation by Ryu Naitou, which began serialization in Dengeki Maoh the same month as the game's Japanese release.

Tropes associated with Tales of Xillia 2: