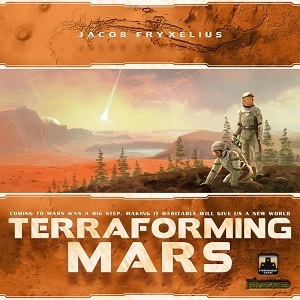 Terraforming Mars is a tabletop/board game set in a mid-future period. Mankind has spread through the solar system, and now has the technology and resources to begin a titanic project. Players take the role of megacorporations given funding from the World Government to accomplish the impossible — turn Mars into a living planet.
Advertisement:

The game takes place over several "generations" as the players research projects (cards), spend their funding on making those projects happen, and acquire the resources and support to take larger and larger steps towards making the planet livable. Mars needs three things: oxygen, a higher temperature, and a working water cycle. Contributing directly to any of these will increase your score and raise more government funding. Creating your own infrastructure — whether industrial, space-bound, economic, or biosphere — will aid your efforts and give you more opportunities to score, as will some good PR for hitting the right milestones. The game ends when Mars reaches a threshold of "uncomfortable, but habitable", and the winner will be forever known as the leading pioneer of Mars.

The game has received a range of Expansion Packs:

The game appears in the following works: