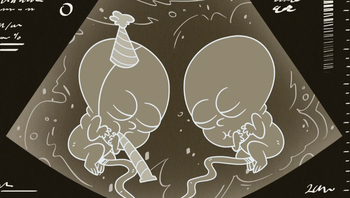 Celebrating your birthday before you're even born.
During pregnancy, the only thing that should be inside a mother's womb or an animal's egg is an unborn child. Yet somehow, the baby manages to have an assortment of objects in the womb with them. Where did they get them? Who knows? Adding more mystery, when the baby exits the womb, the items are either taken out with them or they somehow disappear completely, never to be seen again.
Advertisement:

A Sub-Trope of Pregnancy Does Not Work That Way. Possibly related to Hammerspace. See also Stomach of Holding. May be played as Funny X-Ray (or Funny USG, as it's called). Not to be confused with a Demonic Possession of a fetus, which would fall under Fetus Terrible.