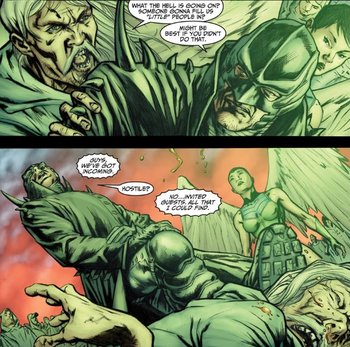 What happens when the "little guy" wants to have a say.
Advertisement:

A story deals with a major crisis/event threatening the populace of a society, nation or world, but the Muggle people in that world have next-to-no agency in determining the events of said story.

Simply put, this trope treats humanity as if it were one, amorphous blob — that our species is only as strong or capable as our social elite. If our best and brightest aren't involved in an outcome, then no one is. When this trope is in play, entire societies rise and fall and entire worlds (or universes) crumble while the common people are barely (if at all) involved or considered at all aside from throwaway lines that glue the welfare of the people with that of the state, like "Protecting the kingdom" or "Humanity's fate depends on us".

A Depopulation Bomb somehow never slows down the production of goods and services and the economy is never affected by a populace or environment being wiped out...or, in the rare event that it does, it's only mentioned in passing until the people in charge figure out alternative means. When attacks or disasters result in comparatively low casualties/damage or get undone via a Reset Button, then no one cares and nothing needs to change. You would think that even the threat of annihilation would traumatize the populace and have far-reaching consequences, but in fiction, the civilian population just forgets about the near-miss like it never happened. Failing to save people is used only in the context of how much it makes The Hero feel bad. Civilian decisions exist only to inform the protagonists if their task got easier or harder.

Stories that revolve around Humanity on Trial tend to be especially guilty of this. Whatever verdict some deity or race of Sufficiently Advanced Aliens decides upon for our race — all from a single trial and never more — almost always depends on the specific individual or group of people they just so happen to judge on behalf of humanity, and that individual or group is always taken as absolute proof that either Humans Are Good or Humans Are the Real Monsters, never in-between. Every other human being, whether good or bad, has no say in the trial whatsoever.

Apathetic Citizens (in the context of large-scale threats) is usually either a Deconstruction or Parody of this trope. In that trope, attention is paid to the fact that people know about what's happening but don't feel obligated or motivated to do something about it. In this trope, little-to-no mention of that is ever brought up; those people are simply irrelevant. If they are brought in to fight the crisis at hand, they will typically form a Red Shirt Army. Survivorship Bias is also at play; if some unremarkable, nameless individual does manage to step up, then they are no longer unremarkable or nameless. Ordinary people don't matter; but this person does, so he is consequently no longer "ordinary".

Here are a couple of easy litmus tests for the trope:

This trope is among the Acceptable Breaks from Reality and an Undead Horse Trope. Since fiction tends to tell the story of a small cast of characters, all or most conflict revolves around those characters. This is especially true if there's a huge gap of power between ordinary people and the people who are relevant. This trope often overlaps with, but is not equivalent to, The Main Characters Do Everything (because the people doing everything here might not be the protagonists).

Can be averted with a Lower-Deck Episode, A Day in the Limelight or The Greatest Story Never Told.