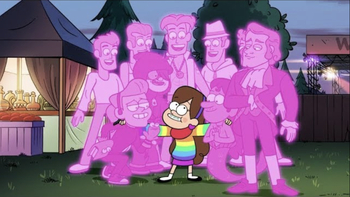 ”Sure, you can ALL marry me!”
"We can supply anything
That your heart desires
But the consequences
Will surely be dire!"
— "The Greatest Show Unearthed", Creature Feature
Advertisement:

These bad guys trap you by preying upon your desires. They know what you want and are willing to offer it to you—or so it would seem. They show you things you've always dreamed of, presenting you with the very thing that your heart yearns for. However, Be Careful What You Wish For. Temptation can be a powerful and dangerous thing, and is sometimes harder to resist than any overt danger.

This is a favorite technique of the Master of Illusion, who may use it to trap others in a Lotus-Eater Machine, or the kinds of monsters that get satisfaction out of manipulating their victims' emotions. After all, it's much easier to catch flies with honey than with vinegar, and the victim often won't even be able to realize the danger until it's too late. Even if s/he realizes it's not real, the power of the desire may entice them to remain "deceived." The Deal with the Devil also frequently runs on this trope, exacting a horrible price in exchange for one's heart's desire, frequently in a way that makes it not worth it in the end. This is why your parents always told you not to take candy from strangers.