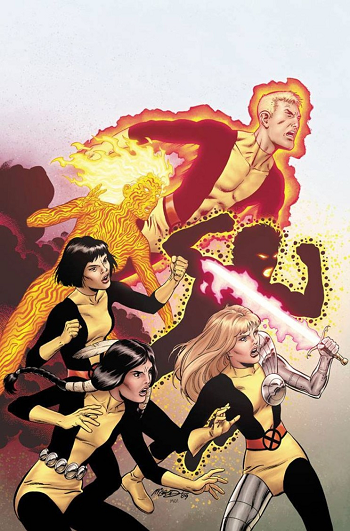 The New Mutants is the first major spin-off of the popular X-Men franchise published by Marvel Comics. To date there have been four series, three of which have featured the same team as main characters.

The team was initially conceived as a new generation of teenage mutants at the Xavier School being taught by Professor X to control and develop their superpowers. They took inspiration from the original five X-Men as a team of five teenagers with matching uniforms, but now multiethnic and intenational. The "original" New Mutants members are:

The team's adventures features a mix of interpersonal drama and high-stakes adventure, with Professor X, Magneto, and even Cable serving as mentors for the team at different points in time. The Demon Bear Saga, where the team confronts Dani's fearsome foe the demon bear, has its own page.

The second New Mutants series, launched in 2003 and written by Nunzio DeFilippis and Christina Weir, features another group of teenaged mutants - air-controlling Wind Dancer, skill-copying Prodigy, super-fast energetic Surge, healer Elixir, emotion-controlling Wallflower, and flying Icarus - but unlike the original New Mutants, they are only part of a huge cast of students at the Xavier Institute. At first they were notable for their drive to become superheroes, but soon rival groups played a large role in the series. Mirage and Wolfsbane of the original New Mutants had since become teachers at Xavier's Institute and had problems coming to terms with the fact they were now the "old guard” in the eyes of the new generation. In 2004 the comic was relaunched as New X-Men: Academy X – for all tropes relating to this incarnation of the team, see that page.

The third New Mutants series written by Zeb Wells, was launched in May of 2009. It reunites most of the original team. This series incorporates a few elements from both New X-Men and the limited series X-Infernus, beginning with the return of Magik and the New Mutants being reassigned to help her blend back into the mutant community. It also has a larger Myth Arc about upcoming threat from Limbo, with occasional tie-ins to various X-overs and one guest-written tie in to Siege. This volume lasted until issue 50 where it was cancelled. Much of the team subsequently became cast members in other series as of the "Marvel NOW!" relaunch.

The fourth New Mutants series, written by Jonathan Hickman and Ed Brisson, began in 2019 as part of the Dawn of X relaunch. For more on this series, see New Mutants (2019)

A film adaptation focusing on the original team was released in 2019. For that page, see here.