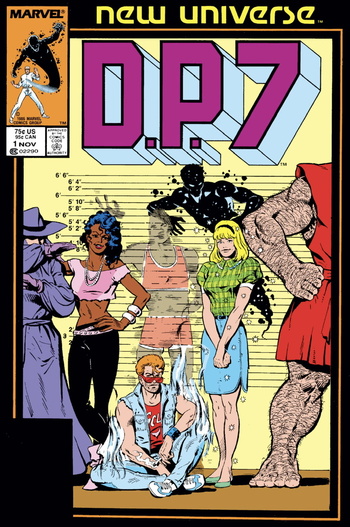 D.P.7 (short for Displaced Paranormals 7) is a 1986 comic book series published by the New Universe imprint of Marvel Comics.
Advertisement:

The New Universe was initially billed as “the world outside your window”, a more realistic setting which was identical to the real world until a single Mass Empowering Event granted some people superpowers. All of D.P.7's paranormals gained their abilities from that "White Event", which occurred shortly before the first issue.

When these powers disrupt their normal lives, each of the seven seeks help from the newly established Clinic For Paranormal Research. Once there, they discover that they're not alone and become the Clinic's newest therapy group, slowly learning to accept and manage their abilities.

However, by the end of the first issue they discover that the Clinic has a far more sinister agenda and the paranormals who run it are engaging in secret Mind Control experiments. Escaping the facility before they can be brainwashed, the group end up on the run, hunted across America by the Clinic's paranormal agents.

D.P.7 was one of eight initial titles launched to introduce the New Universe, a shared world completely separate from the existing Marvel Universe, and became one of the most commercially successful, longest-running series in that setting.

The series had a relatively realistic examination of the consequences of paranormal abilities. While some characters had powers that were clearly advantageous, others were balanced by tremendous costs or were almost entirely negative. Even those who didn't have such Blessed with Suck elements sometimes found that their paranormal powers would wreck their relationships and normal lives.

The original group of characters are: