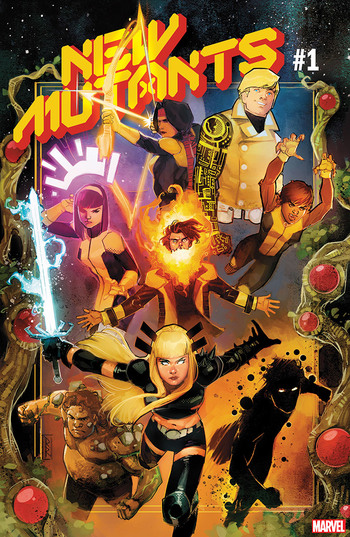 "We are going to get into so... much. Trouble."
—Sunspot
Advertisement:

The most classic members of the team consisting of Magik, Sunspot, Wolfsbane, Karma, Mirage, Cypher (merged with Warlock) and Boom-Boom reunite along with four newcomers in the form of Chamber, Mondo, Glob and Armor. Their first missions takes them to space alongside the Starjammers, where they seek out a missing member, Cannonball, to share the good news.

Beginning with the switch in writers with issue #14, the series began to focus on the efforts of the New Mutants to provide training and guidance to the younger generations of Krakoa as they explored what it meant to be a mutant in this new age. Magik, Mirage, Wolfsbane, and Karma were joined by Warpath and Warlock in this mission, while the young generation of mutants were represented by the "Lost Club" of Gabby Kinney, Anole, Cosmar, No-Girl, and Rain Boy.