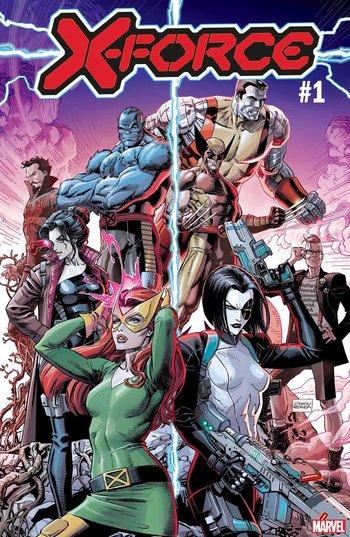 "There is us, and there is them."
— The Man with the Peacock Tattoo, X-Force #1
Advertisement:

X-Force is a 2019 comic book series, and the sixth volume of the title focused on the titular team. It is part of the Dawn of X relaunch, written by Benjamin Percy (Wolverine: The Long Night) and drawn by Joshua Cassara (The Falcon).

After the foundation of the nation of Krakoa, it's quickly deemed necessary that the X-Men are going to need their own intelligence agency to keep up with any and all threats to their people. Enter X-Force, the group that will ensure that the mutant nation will continue to exist, free from foreign influence... And by any means necessary. Featuring Jean Grey, Wolverine, Domino, Black Tom, Beast, Colossus, Sage, and Quentin Quire.