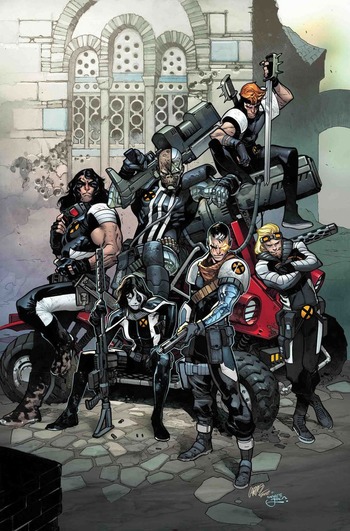 Together again.note Except Boom-Boom, because she slept in.
Advertisement:

The fifth X-Force series, spinning out of the events of Extermination and launched as part of the Marvel: A Fresh Start initiative. Written by Ed Brisson (Old Man Logan, Extermination) with art by Dylan Burnett (Cosmic Ghost Rider).

During the events of Extermination, time-travelling X-Force founder Cable was gunned down in cold blood... by a younger looking Cable, who professed that Cable had failed in protecting the timeline. Now, the original X-Force will reassemble to hunt down their former leader's killer, this so-called "Kid Cable", with some wanting to talk while others want his head. Thrown into the fray is the time-travelling cyborg Deathlok, who becomes entangled in the affairs of the team.

The series came to a close after 10 issues, as part of Marvel's relaunch of the X-books into The Krakoan Age.