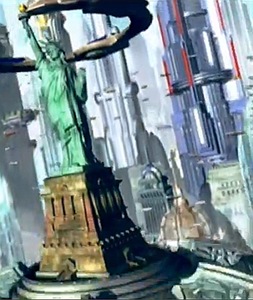 You maniacs! You built it up!
"It's called a constant. Desmond, you have no constant. When you go to the future, nothing there is familiar. So if you want to stop this, then you need to find something there... something that you really, really care about... that also exists back here, in 1996."
— Daniel Faraday, Lost
Advertisement:

When you Time Travel, or you spend some time as a Human Popsicle, or even just leave a place for a long time, things tend to change a lot. But even when almost everything has changed, there's some character or thing that exists in both time periods, not because of time travel, but because they remained there the whole time. They are The Constant, and they connect two different-looking settings together and prove they're the same place.

Frequently the work will go out of its way to make a point of The Constant, and in our examples we focus on these intentional, obvious Constants. If the time-traveling character didn't realize they were in the same place until discovering The Constant, then you have Earth All Along.

If the time traveled was too short, there may be so many Constants that it's unremarkable. For example, it's not uncommon for the entire cast from the past to switch to Future Badass versions of themselves in the future. On the other hand, there is no minimum time difference — a city may be reduced to an unrecognizable place overnight by a terrible weapon, except for The Constant proving it was there. Or as Nena would say, "If I could find a souvenir / Just to prove the world was here."

If the time traveled is very long, the Constant will typically be a structure or an immortal rather than an ordinary person. If it is a person, it's usually the Identical Grandson or a variation thereof (such as My Grandson, Myself).

If everything inexplicably survives in a slightly distressed state (at worst), it's a case of Ragnarök Proofing.

If the Constant in question ends up being destroyed in real life (e.g. the World Trade Center), its appearance in fiction can swiftly be rendered Harsher in Hindsight.

Not related to a high-ranking member of Providence from the Hitman series.