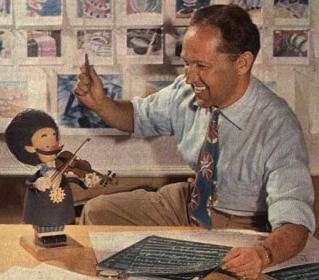 He was nominated for Academy Awards (in the category Best Short Subjects, Cartoon) in seven consecutive years (1942–1948) and received an honorary award in 1944. This makes him the second-most nominated Hungarian exile (together with William S. Darling and Ernest Laszlo) after Miklós Rózsa.

At the age of 23 in 1931, he married Elisabeth "Zsoka" Grandjean, and after moving to Berlin, founded Trickfilm-Studio GmbH Pal und Wittke, with UFA Studios as its main customer from 1931 to 1933. During this time, he patented the Pal-Doll technique (known as Puppetoons in the US).

In 1933, he worked in Prague; in 1934, he made a film advertisement in his hotel room in Paris, and was invited by Philips to make two more ad shorts. He started to use Pal-Doll techniques in Eindhoven, in a former butchery, then at villa-studio Suny Home. He left Germany as the Nazis came to power.

As an animator, he made the Puppetoons series in the 1940s, which led to him being awarded an honorary Oscar in 1943 for "the development of novel methods and techniques in the production of short subjects known as Puppetoons". Pal then switched to live-action film-making with The Great Rupert (1950), but it and several of his subsequent films would incorporate stop-motion animation as well.

Today, Pal is best remembered as the producer of several science-fiction and fantasy films in the 1950s and '60s, four of which were collaborations with director Byron Haskin, including The War of the Worlds (1953). He also produced and directed Tom Thumb (1958), The Time Machine (1960), and The Wonderful World of the Brothers Grimm (1962).

Notable works on this wiki: