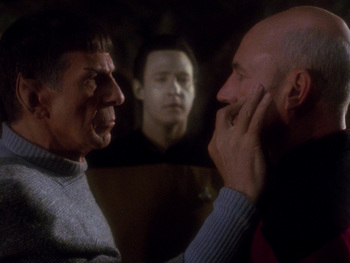 Don't worry, this went better than both their last mind-melds.
Advertisement:

The episode begins with Spock asking Picard why he is on Romulus. Picard asks Spock the same thing, noting that Spock's presence on Romulus has freaked out a lot of people in Starfleet. When Spock says that his mission is a personal one of peace, Picard hits back at what he considers to be "Cowboy Diplomacy", and that Spock could compromise Federation security should he be captured by the Romulans. Picard also informs Spock of Sarek's death. The news of Sarek's death shakes Spock clearly, and he divulges the reason for his presence on Romulus: through a contact that he met at the Khitomer Conference, he was made aware of a movement on Romulus that is wishing for reunification of the Vulcan and Romulan peoples. Spock also reveals that he did not tell the Federation because of how Captain Kirk was framed in the murder of Chancellor Gorkon; he refuses to allow the Federation to be set up in a similar manner. To this end, he reveals that his contact is a high-ranking member of the Romulan Senate, Pardek, and that Pardek has a connection to the new Romulan procounsul, Neral. Spock hopes to convert Neral to his reunification movement, while Pardek brings news that Neral is willing to meet with Spock.

Back on the Enterprise, Riker's investigations into the smuggling ship that was destroyed at Qualor II have led him to a bar near the Depot itself. Turns out the pianist at this bar is the ex-wife of the captain of that ship. She informs Riker that the person that Riker should be talking to is Omag, a rather obese Ferengi who is a regular of the bar. When Omag does arrive, Riker harshly interrogates the Ferengi who divulges that he delivered the T'Pau to a Barolian freighter near Galorndon Core.

Spock meets up with Neral, and the conversation appears to be going along well, with Neral saying that he may push the Romulan Senate towards reunification. When Spock leaves, Neral is revealed to be working with Sela, meaning that there is something else at play that Spock is unaware of. Back with the Underground Movement, Picard expresses skepticism that a leading Romulan figure would swiftly agree with the idea of reunification of Vulcan and Romulus. Spock agrees with Picard's assessment, but has to play along to see what the Romulans are up to. Data and Picard return to the Klingon ship, where they discard their Romulan disguises. Data attempts to access the Romulan Communications network to contact the Enterprise, where Picard and Data learn about the incident at Qualor II and the lead to Galorndon Core, and inform Riker of Spock's plans for reunification. However, the transmission is being jammed by an unknown source, and Riker orders the Enterprise to Galorndon Core to investigate further. Data accesses the logs in the Communication Network and finds a transmission from Romulan Intelligence sent to Galorndon Core and received by a Barolian freighter consisting of 4 digits: 1 4 0 0.

Picard and Data return to the Underground Movement where they relay the message to Spock. Spock immediately realizes that he has been betrayed: the numbers are actually the time in which Spock is supposed to make an announcement regarding reunification the following day. At this point, a number of Romulan troops burst in, led by Sela. Spock immediately calls out Pardek as working with Sela, given that it was Pardek's idea to come to Romulus. Sela acknowledges Pardek's treachery and tells Spock that his idea of reunification will still happen, but in a different form: the invasion of Vulcan by the Imperial Romulan Fleet. Meanwhile, at Galorndon Core, the Enterprise receives a message ostensibly from Picard saying that Spock's initiative is successful and to await further instructions.

Picard, Data, and Spock are brought to Sela's office where it is revealed that there are actually three ships full of Romulan Troops that will be sent to Vulcan as the vanguard of the Romulan invasion force. Sela threatens to kill Spock unless Spock makes the announcement about reunification but Spock outright refuses: he surmises that he will be dead anyway once he makes the announcement. This only seems to enrage Sela further, she then reveals that she has a backup plan to use a holographic recording of Spock to make the announcement. It's not perfect, as she would rather have Spock delivering the announcement to reduce suspicion, but then again, they only need to confuse the Federation long enough for the Romulan Troops to entrench themselves on Vulcan. Sela then leaves to begin the operation, locking Picard, Data, and Spock in the room with the holographic projectors. Spock then notices that they still have access to her computer terminal and Data immediately gets to work. When Sela returns, she finds that the three prisoners are apparently not in the room. They are suddenly accosted by Riker and a security team, but when they fire on the intruders, they realize that the intruders are holographic projections. This distraction is enough for Spock and Picard to surprise Sela's security team and knock them out, with Sela now held by Spock holding one of the disrupters that he obtained from one of the fallen security members. It turns out that Data used the holographic projectors to create false walls to hide himself, Picard, and Spock, enabling them to surprise the Romulans. Data now uses this moment to alter the pre-recorded message of Spock to inform the public that the Vulcan ships are actually an invasion force and must be stopped. The transmission is sent out, but stopped when the Romulans realize the message has been compromised. With her plans now ruined, Sela tells Picard, Data, and Spock that they will never get out of the building alive, but Data has already planned out an escape route and knocks Sela out with a Vulcan Nerve Pinch, to the approval of Spock.

Back on Galorndon Core, the Enterprise detects the three Vulcan ships and moves to intercept. Dr. Crusher then informs Riker of a distress signal that she has received from a nearby Federation Colony, of which the Enterprise is the only vessel able to assist. Riker questions the timing of this distress call, but before he can take any further action, they receive the altered message of Spock warning of the invasion force. Riker immediately tells Crusher to verify the distress signal as he now suspects it is fake. The Enterprise rushes to intercept the three ships, but when they finally do, a Romulan Warbird decloaks alongside the three ships and promptly destroys them, then cloaks once again.

We conclude this episode on Romulus, as the Underground movement has set up shop in a different cave network that Pardek does not know about, ensuring some level of security for them. Picard implores Spock to return with him and Data, but Spock refuses noting that this is now his life mission and that he must work to change Romulan Society from within and prepare the Romulan people for a time in which reunification would be acceptable to both peoples. Picard offers Spock a parting gift: to share with him what Sarek shared with Picard during their mind-meld. Spock accepts and is truly moved by what he now knows is his father's true feelings for him.