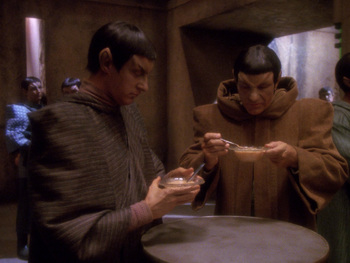 When on Romulus, do as the Romulans do.
Advertisement:

After the tribute, we see the Enterprise's terraforming mission has been cancelled, and it has been called to Starbase 234 by Fleet Admiral Brackett, who is unwilling to discuss her reasons over subspace communications. Meeting with Captain Picard, she advises him that one of the Federation's most prestigious and celebrated Ambassadors suddenly disappeared without trace, and that intelligence suggests that he is currently on the planet Romulus. The trip was unauthorized, and there are serious worries that he has defected. She shows Picard an image taken on Romulus that clearly shows the face of the missing ambassador—Spock.

The Enterprise travels to Vulcan, where Picard must give the unfortunate news to Spock's father, retired ambassador Sarek, that his son may have betrayed the Federation. Sarek is extremely ill, suffering from the effects of Bendii Syndrome. Sarek's wife Perrin tells Picard that Spock couldn't have been abducted, as he tidied up his affairs before his disappearance, and then relates that there has been a rift in the relationship between Sarek and Spock over the Federation–Cardassian War. Sarek is now wasting away in bed and wants nothing more than to heal the rift between himself and his son.

Meanwhile, Riker and Geordi examine wreckage from a Ferengi vessel that crashed in the Hanolin asteroid belt. The material dentarium is detected in the debris, confirming that their origin is Vulcan. Picard goes to the planet and enters Sarek's room. Sarek is in bed and restless—shouting and crying. Picard asks him about Spock, and he suddenly calms and becomes lucid. He recognizes Picard, who asks if he would know why Spock would be on Romulus. Sarek says possibly to meet with Pardek, a Romulan Senator whom Spock met at the Khitomer Conference. Picard asks if Spock may have defected, but Sarek responds, "Never!" Sarek soon becomes confused again, and in his ramblings admits that he's always felt proud of his son's unyielding spirit. Picard reminds Sarek that they have a part of each other, and he knows Sarek loves Spock despite all the pain he's caused. Sarek struggles to give Picard a message to take to his son: "Live long and prosper."

Picard decides that he must travel to Romulus to find Spock. But to travel through the Neutral Zone, they'll need a cloaked vessel. So he decides to try to contact Klingon Chancellor Gowron, who should be willing to grant a favor to his Arbiter of Succession, but after three days of hailing, there's no response. Worf explains that their messages may be being ignored because "Gowron has been rewriting Klingon history," claiming that it was his genius that ended the civil war, without a word about the help of the Federation.

Data shows Picard a Barolian visual identification of Pardek taken at trade negotiation four years ago. Picard compares the image to the one with Spock in it on Romulus and finds that the man with Spock is indeed Pardek, who is known as a radical within the Romulan Senate and an advocate for peace. Finally, the Enterprise is hailed from Qo'noS. It is B'iJik, the Junior Adjutant to the Diplomatic Delegation. He advises Picard that Gowron is too busy to meet with him. Picard is incensed. He diplomatically threatens Gowron through B'iJik, implying that if Gowron doesn't grant his request, he will request a ship from one of Gowron's rival factions and damage his image, and playing to Gowron's vanity as well. B'iJik promises to give the message to Gowron.

As Data and Picard prepare for their mission, being fitted with prostheses to look like Romulans, La Forge has determined that the debris found on the Ferengi vessel is part of the deflector array from the Vulcan ship T'Pau. This ship was decommissioned and sent to Qualor II as scrap. Riker suggests that they take the Enterprise to Qualor II and continue their investigation, and Picard agrees. Worf informs Picard that a Klingon ship has just decloaked off the port bow, compliments of Gowron. Picard and Data go aboard the Klingon vessel and proceed toward Romulus while the Enterprise goes the other direction toward Qualor II.

Riker takes the Enterprise to the Zakdorn Surplus Depot Z-15, a Federation scrap yard for decommissioned ships. They contact the quartermaster of the depot, Klim Dokachin, who is less than helpful—until Riker invites him on board and introduces him to Troi. The Enterprise goes to the coordinates of the T'Pau, but the ship is gone. Dokachin says that the deflector array was sent to the USS Tripoli, a holding vessel on the outer rim of the shipyard. They go to that location and find it, too, is missing. Dokachin, astonished that two of his ships have disappeared under his nose, informs them that there is a transport of deuterium parts to the Tripoli scheduled in two hours. Riker orders the ship to be moved away and powered down with the exception of sensors and life support. They lie in wait to see what will happen when the transport is initiated.

Aboard the Klingon ship, Picard and Data are in their assigned quarters. There is one bunk, made of metal, with no bedding. Picard lies down to sleep, and Data... stands nearby, calculating how he should behave when undercover as a Romulan, making Picard nervous and unable to sleep. Just as Picard gets up, they are called to the bridge, where Captain K'Vada gives Picard a subspace message he monitored. Picard reads, and sadly tells Data the news it contains… Sarek is dead.

On the Enterprise, a ship is approaching at warp speed. It stops at the coordinates 12 Delta 4—the previous position of the Tripoli. The small combat vessel is heavily armed and receives the scheduled transport. Riker powers up all systems and hails the ship, ordering them to identify themselves. The ship turns to intercept and fires phasers at the Enterprise. Riker orders Worf to return fire, targeting only the weapon systems and using only a .75 power burst just to "get their attention." The ship is hit and, due to all the armament and stolen munitions on board, explodes.

Data and Picard are in costume and prosthetic makeup, looking just like Romulans. Data observes that Picard has been pensive since learning of Sarek's death. Picard attempts to explain to Data the effect that Sarek's death has had on him and also what effect it will have on Spock. They beam down to Romulus after K'Vada tells them that he won't rescue them if anything goes wrong. On Romulus, Senator Pardek arrives at the proconsul's office and is asked if he knows of Jean-Luc Picard. He says he does not and is told that Picard is on his way to Romulus. They decide to alert security to be watchful for him.

Picard and Data arrive at the street where Pardek and Spock were photographed. They locate the office of a legal intercessor (lawyer) who is likely related to Pardek. They decide to get some food and wait for him to arrive. At a nearby restaurant, they notice two Romulans in military uniform just before Pardek comes down the street. They turn toward Pardek and the uniformed Romulans stop them and escort them out. Data and Picard are taken to an underground chamber. Pardek walks in behind them and says, "Welcome to Romulus, Captain Picard." The military men were his assistants in disguise. Picard explains that he is on an urgent mission from the Federation. He is looking for Ambassador Spock. "Indeed," says a voice from deeper within the cavern. "You have found him, Captain Picard." It is Spock.

Tropes found in "Unification: Part 1" include: