Recap / Star Trek: The Next Generation S5 E6 "The Game" 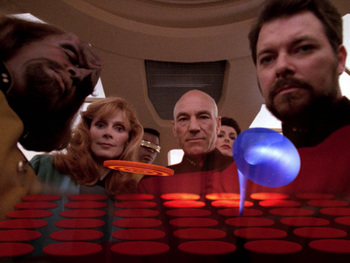 This episode begins with Riker on vacation to the pleasure planet Risa, enjoying some time with a Ktarian woman named Etana Jol. During the course of their frolicking, she introduces him to a small headset device: a holographic video game, and an incredibly simple one at that—just put the frisbees into the tornados to win. Riker notes the little jolt of pleasure the device gives him, his reward for winning. As Riker's eyes glaze over, the music takes an appropriately dark turn.

After Riker's return, the ship is journeying to the Phoenix Cluster to do some exploration. Wesley Crusher stops by on break from Starfleet Academy and gets welcomed back by a surprise party. At Riker's suggestion, Wes makes it a working holiday and pitches in to help the Enterprise complete its exploration. And so down to Engineering Wes goes, where he meets the pretty and plucky young Ensign Robin Lefler. Sparks start flying, and not from the warp core.

In the meantime, Riker is trying to show The Game to everyone within earshot. Then, in turn, each person who receives The Game tries to shill it to everyone else as well. This cannot be good. Indeed, at one point Dr. Crusher calls Data down to sickbay to assist her with a Technobabble experiment, but while his back is turned she hits his hidden off-switch and starts tinkering with his brain. Later, she tells Picard that Data simply collapsed after a servo malfunction; but La Forge determines that Data's brain is still fully functional, but somehow unable to send control signals to his body. And then Riker gives him the Game.

Later on, Wesley is working closely with Lefler and discovers that she knows all about him. He's something of a celebrity in the Academy. She teases him over some rumors about him, and Wes invites her on a date to get to know him for real. On his way to meet Lefler, Wes barely scrapes past being "introduced" to the Game by his mother. During his date, he and Lefler bond over growing up with parents in Starfleet. They start to notice that everyone on the ship is becoming obsessed with the Game and decide to make it a shared activity to study it.

Wes and Lefler quickly discover that the Game is highly addictive and also affects the reasoning sections of the brain, a sinister combination. Wes goes to Picard to announce his findings, but unbeknownst to him, the captain is already under the Game's thrall. The plucky pair also examine Data and find that someone has severed the connection between his brain and his body, rendering him inert. No one except Dr. Crusher and La Forge know how to do that, and the pair conclude that the Game is somehow behind all this, since Data would be the only crewmember who is not susceptible to its brainwashing effects. Sure enough, Worf and Crusher arrive with a pair of Game devices to force on Wes and Lefler, only to find them already playing. Fake out! Those were phony devices! And so the duo are free to continue their investigation cum resistance.

Meanwhile, a ship approaches and contacts the Enterprise; it's Etana Jol, only now she's got a decidedly military-looking uniform and hairdo. This device is, in fact, her tool for gaining control of the Enterprise and its crew. But not just the Enterprise; she gives orders that the Game be spread to various Starfleet and Federation installations as part of her "expansion" project. But first they'll have to deal with Wesley and Lefler, who they now realize are not really playing the Game.

Wes meets Lefler in Engineering, and discovers that she's been compromised (off-screen) when she tries to foist the Game upon him. Wesley initiates a lengthy game of cat-and-mouse with the crew, but is eventually caught, brought to the bridge, and forced to play the Game. At that moment, Data steps onto the bridge, lowers the lights and flashes a strobe into everyone's eyes, bringing them back to normal. Wesley reveals that sometime in the interim, he had repaired Data and played the cat-and-mouse to give Data time to come up with a way to circumvent the brainwashing. The cleansing strobe effect has already been sent throughout the ship, and Dr. Crusher is sent to help the remaining stragglers.

The Enterprise captures Etana's ship, and everything is back to kosher. Wes kisses Lefler goodbye as he prepares to return to Starfleet, proclaiming that a few light years can't keep good friends apart.