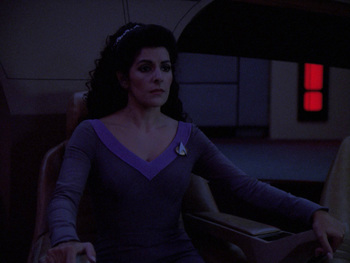 Troi takes command of the Enterprise (however hesitantly).
Advertisement:

The previous mission of the Enterprise crew was finished ahead of schedule, so everyone has some free time. The main characters are spread throughout the ship doing various activities, with only Picard and Troi on the bridge. Three elementary school kids have won the Enterprise science fair, and as a reward Picard takes them on a tour around the ship. Soon after Picard and the kids have entered the turbolift, the Enterprise starts to shake violently, all power on the ship is lost, and the lift falls down. It turns out a quantum filament has hit the Enterprise, resulting in a total power failure. Even the communicators are down. The crew members are stuck in different departments of the ship, and they all have to figure out what to do without knowing what the others are up to.

On the bridge, it turns out Troi is the most senior officer still alive. She takes command of efforts to restore some semblance of power and control over the bridge, but she's completely out of her depth making command decisions and relies heavily on the others' technical knowledge. After restoring power to the terminals in Engineering, Ensign Ro realizes that the warp core is about to explode and pressures Troi to separate the saucer section to save as many people as possible. Troi insists on waiting until the last moment to give the rest of the crew every opportunity to fix the problem.

Stuck in the turbolift, Picard has broken his ankle, and the children are terrified. Picard has to figure out a way to get them out before the safety stop breaks, killing them all. The captain recruits the children to be part of his new "crew" and enlists their help scouting the area. He decides that the children have to leave him behind and find safety on the escape ladders, but the little girl serving as first officer informs him that the children refuse to leave him behind, so he leads them up the escape ladder to safety while singing "Frere Jacques."

La Forge and Crusher are stuck in the cargo bay, where a plasma fire threatens to blow up some hazardous chemicals. La Forge eventually decides that they have no other choice but to open the cargo bay doors, sweeping the chemicals into space and snuffing out the fire. In the process, however, La Forge and Crusher will be subjected to the vacuum of space. They both hold onto a railing while all the air is expelled from the bay, then stagger to the opposite side to close and repressurize the bay just before they can both pass out.

In Ten-Forward, O'Brien's pregnant wife Keiko goes into labor, with the hapless Worf forced to act as a midwife. Worf has delivered one baby before, but it was in a simulation, so his bedside manner could use some improvement. He muddles through the process as the agitated Keiko screams at him until she finally gives birth. The relieved Worf cuts the umbilical and hands over her new baby daughter.

Data and Riker venture out to the reach Engineering to see if they can restore power. When they encounter an impassable arc of electrical current, Data uses his body to short out the hazard. Riker detaches Data's head to finish the journey and plugs him into the ship's system. Data realizes that the warp core is about to explode and hastily guides Riker to make the proper connection so he can stop it. They succeed.

On the bridge, O'Brien confirms that the ship is saved, and Ro admits that Troi was right, but Troi states that she could just as easily not been.

A short while later, everything is more or less back to normal, and Picard receives a visit from his child crewmates, who present him a plaque in thanks for saving them. As he turns to leave, he gives the bridge to "number one," and both Riker and the little girl answer, "Aye, sir!" Everyone laughs.

Tropes featured in "Disaster" include: