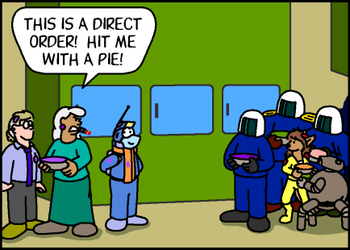 You could have phrased that better...
"Here's the beer. Here's the entertainment. Now have fun. That's an order!"
— Jean Rasczak, Starship Troopers
Advertisement:

A Stock Phrase: Someone in command orders a subordinate to do something, and adds, "That's an order." It may be to overrule objection, such as More Hero than Thou, or to show seriousness. It may be worded differently (for example: "I wasn't asking"), but it's always to make clear that he's in charge and what he says goes.

Often used in jest, when the commander orders the friendly subordinates to do something extremely mundane, like asking for a coffee, or telling them to shut up, and jokingly adds, "That's an order."

May also be worded as "Do you need me to make that an order?" Often paired with a With Due Respect comeback on the subordinate's part.

It may lead to Just Following Orders later on if the subordinate is subsequently asked to justify his actions to others.

Commonly inverted when the situation involves risking the subordinate's life (or career), and the commander says "Now, I won't order you to do this, but..." In this case, the True Companions will invariably carry out the request anyway.

Not to be confused with That Wasn't a Request, which is said by people who have no official command over others but, for the moment, are ordering them around anyway and are about to use force to back up their demand.

Can be Truth in Television in the military, but somewhat rare. This is because technically, anything a lower ranking person is told to do is considered an order, and both people know it.