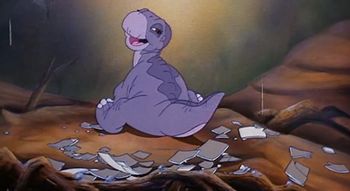 And the baby comes out nice and clean.
Advertisement:

In many works and forms of media, the act of giving birth, be it by humans or animals, is a scene that either takes a few minutes or is skipped over entirely. The baby comes out looking dry and clean and there's little to no aftermath or mess, much less the expulsion of the placenta. The mother might be a bit sweaty, but she's for the most part fine, with her makeup still pretty much intact.

Obviously, in real life this isn't the case. The miracle of birth may be beautiful and natural, but it's also pretty damn disgusting, what with amniotic fluids, blood, the placenta, and in some cases fecal matter, urine, vaginal tearing, and all other bits and fluids you can think of. The mother also has a tendency to end up drenched in sweat and red in the face due to exertion, as well as knocked out or giddy due to pain or pain medicine. Meanwhile, a healthy newborn, after spending its first few minutes of life crying up a storm (a good thing, since this means it’s breathing properly and isn’t in distress) will probably be very drowsy or even fast asleep, bright red and covered in a white waxy substance called vernix, plus a bit of blood and amniotic fluid for good measure. On the rare occasion that the placenta is mentioned in media, it is usually to set up a Death by Childbirth situation.

This trope is often lampshaded via having characters (usually male) who are witnessing birth for the first time getting squicked out by the scene.

A variation is when creatures hatch from eggs looking mostly dry and clean. Modern reptile and bird eggs have moisture inside, not to mention bits of leftover membranes — a baby chick needs about an hour of drying time to go from 'damp dinosaur' to 'adorable fluffball.'

This is usually necessary or desired for the sake of not grossing out audiences. Another factor is the influence of the Moral Guardians; films with G and PG ratings and TV shows scheduled to air during certain hours aren't supposed to show great quantities of blood. A part of The Hays Code: "Scenes of actual child birth, in fact or in silhouette, are never to be presented." And even without those concerns, a genuinely realistic birth would be very demanding and time consuming (read: expensive) for cast and crew alike). Sometimes they'll just do a Time Skip: you'll see the mother pushing and probably screaming and then skip to a few minutes later when the baby's already clean and wrapped up.

Sub-Trope of Pregnancy Does Not Work That Way and related to Instant Birth: Just Add Labor!. When a live baby is shown, it is never an actual newborn, and is often a Three-Month-Old Newborn, due to legal reasons. Compare Out Giving Birth, Back in Two Minutes, for births taking place off-screen and in less time than they should.

No aversions unless they are noteworthy, please, lest this example list become a list of every character ever born in any medium.