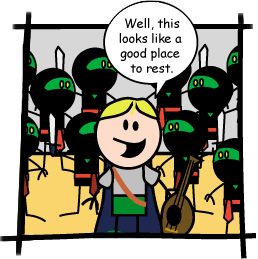 He's going to have a good, LONG sleep.
Prometheus: You're in luck! The bridge ahead is still intact.
[an Invader throws a car off the bridge and heads for Michael]
Michael Ford: You neglected to mention the giant alien standing on the bridge.
— The Conduit
Advertisement:

When a character fails to notice something important or obvious, something they would want to know, even when looking.

The name comes from a typical mechanic from RPG games, dating back from the arch-RPG Dungeons & Dragons. A character's success on various tasks is determined by a dice roll combined in some way with base statistics (such as strength or intelligence) and some skill. The skills in question include several that require substantial luck, like Appraise, Use Magic Device, Hide, or the various Perform skills, but also such mundane tasks as Listen and Spot. Indeed, the Spot skill, which determines whether someone notices events around them in time to react, is often very dependent on luck, even if it's something any idiot should be able to see.

Because things like searching for hidden objects/doors/clues, "noticing what's going on out of the ordinary" or good old ambushes are all very common events in most RPG games, Spot Checks tend to be among, if not THE most common dice rolls being done. A single failed Spot Check can put the whole party at a disadvantage, and if you're not lucky you can miss something vital, even while looking for it. Considering the number of Spot Checks a typical game involves, there always are instances of missing out on something because of One Bad Roll, which naturally frustrated people about Spot Checks for literally decades.

This trope differs from Weirdness Censor (where they don't see it because it's so bizarre), Selective Obliviousness (where they don't want to see it) and Bystander Syndrome (where they ignore it because they don't care). Also differs from Attention Deficit... Ooh, Shiny!, as there usually isn't that excuse. Opposite of Hyper-Awareness. Can often result in Right Behind Me (although that might be closer to failing a Listen check) or I'm Standing Right Here. If they eventually notice it, but not right away, that's Delayed Reaction.

This doesn't necessarily imply that the character is stupid; they just aren't noticing an important "something". One of the oldest jokes in Dungeon Master's arsenal used to be for players who fail their spot checks badly enough to find themselves "discovering" something both incredibly large and plainly obvious such as an island or a mountain, instead of the one unobtrusive detail that they were trying to find.

May relate to Genre Blindness and Forgot About His Powers. May be a sign of a character carrying the Idiot Ball or being an Unwitting Pawn. When the character's creator explicitly decides what he can and cannot notice, it may lead to Plot-Sensitive Snooping Skills. In cases of characters consistently failing spot checks to penetrate a Paper-Thin Disguise, we have Clark Kenting. Someone who does this too often may be Too Dumb to Live, or it may be a case of Obfuscating Stupidity, especially if the spot check failures suddenly stop at a crucial point. Can result in the characters realizing that Camp Unsafe Isn't Safe Anymore. Also, this is Truth in Television, as anyone who lost his keys in the open middle of his desk can say. Behind the Black or No Peripheral Vision is when the character should be able to see it from his vantage point, but doesn't because the audience can't from their angle. The Chaste Hero is a character (usually male) who consistently rolls "1"s where romance is concerned. If the thing they're failing to notice is a breaking news story, that's Ignored Vital News Reports. If everyone fails to notice a creature that's big and dumb enough that its presence ought to be obvious, it's Suspiciously Stealthy Predator. If one person is looking for another person but constantly fails Spot Checks when they are close to the person they're searching for, it's Missed Him by That Much. This is usually the reason why Jump Scares happen. Banana peels, however, thrive on this trope.

The scientific term is for this phenomenon is Inattentional Blindness,

so as incredible (and possibly depressing) as it sounds, it is known to happen to some degree in real life as well.

Strangely, more likely to happen to a Meganekko than someone with an Eyepatch of Power.

Contrast with Awesomeness by Analysis.

If the author does this, you may end up spotting Rouge Angles of Satin.

When Homer and Wally's Super Bowl tickets turn out to be fake (which they failed to notice), Homer tries to let his gang of friends down easily. Unfortunately, they immediately see through the whitewash and flip out.

Leaves in my hair

When Homer and Wally's Super Bowl tickets turn out to be fake (which they failed to notice), Homer tries to let his gang of friends down easily. Unfortunately, they immediately see through the whitewash and flip out.

Leaves in my hair