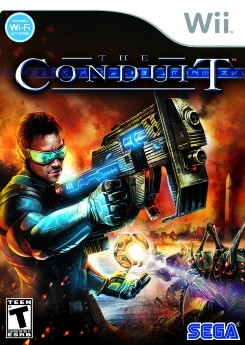 "My name is Michael Ford. I'm probably the only one left who knows the truth... I know it, because I was there."
—Michael Ford
Advertisement:

The Conduit is a first-person shooter developed for the Nintendo Wii by High Voltage Software and published by Sega. It's notable for having a custom-built graphics engine which allows the visuals to resemble PlayStation 3 and Xbox 360 titles (at least in terms of effects) using the Wii hardware. It was released June 23, 2009.

In the game, you play as Michael Ford, a former Secret Service agent caught in the middle of a Washington, D.C. Alien Invasion, set in the near future. Your job is to get to the bottom of the mystery with weapons both human and alien, directions from a man known only as Mr. Adams, and the mysterious All-Seeing Eye for environmental interaction.

Besides the above features, the game has online multiplayer with Wii-Speak support and a fully customizable HUD and control scheme.

This is one of the first major games by HVS, who spent years earning money from making Licensed Games and commercial simulators.

The sequel, Conduit 2, was released in April 2011. It features more weapons, expanded multiplayer options, individual character classes, split-screen local cooperative and competitive play, and a single-player campaign that takes players to exotic locations around the world.

In 2013, the game was ported to Android OS mobile devices, specifically those with an Nvidia Tegra graphics chipset.